Not many people may be aware, but we are in contact with different types of resins even if we are not walking in the woods. There are resins in the car that takes us out and about, in the mobile phone we are constantly looking at, and in the floor we walk on. And yes, also in the plane that flies us to our next holiday destination. Modern life as we know it would be hard to imagine without resins, especially epoxies. Used in countless applications across industry, epoxies are one of the most adaptable and widely sold high-performance polymers on the planet.

Epoxy resins have been commonly used since the 1930s, when Swiss scientist Pierre Castan made a smoothie-like mix with a thermoset polymer and a hardener, binding them together in a chemical reaction called “curing”. Years later in the US, scientist Sylvain Greenlee applied a similar principle to develop a low-molecular resin known as BADGE – now the most widely used epoxy resin in the world.

Modern epoxies are versatile substances which, depending on the desired outcome, can be blended in different grades, from liquid to almost solid. Today there are more than 50 different types of epoxies in commercial use. There are also hundreds of hardeners to modify their properties to satisfy the most demanding and unique requirements. Well over 250,000 tonnes of resin are used every year in Europe in applications ranging from flooring to sewage pipes, from sports goods to electronics, from automotive to aerospace.

When did epoxies take off? 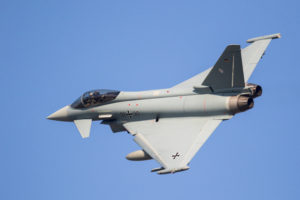 It was 1947 when Howard Hughes, the US visionary aviator and aircraft designer, used epoxies for the first time in the construction of his airlift flying boat “Spruce Goose”. This aircraft, also known as HK-4 Hercules, was designed during World War II to transport cargo and troops over long distances. Its massive size and distinctive wooden construction – assembled with three layers of epoxy glue – made it an American icon. Epoxies and aircraft design have been inseparable ever since.

The flight to commercial aircrafts

It did not take long for commercial aircrafts to follow the footsteps of trailblazing defence applications using epoxy-based composites. The main advantages were that composite material reduces airframe weight, which enables better fuel economy, lower operating costs and lower CO2 emissions. European conglomerate Airbus saw this potential and, in the 1980s, started to apply composite materials in the rudder of some of its commercial aircrafts such as the A300 and A310.
Composite tail fins were next, leading to a reduction in the 2,000 pieces initially needed for the metal-based version to fewer than 100 as well as lower weight and production costs.